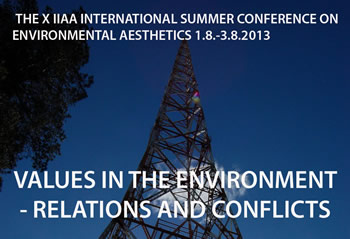 The International Institute of Applied Aesthetics will arrange the Xth Summer Conference on Environmental Aesthetics. The theme of the conference is “Values in the Environment: Relations and Conflicts”

Environments are arenas for different sorts of values. Environments are valued for their beauty and aesthetic experiences they afford, but there are also moral and ecological values that need to be taken into consideration, for example, in decision-making concerning particular areas both in human and in natural environments.

There is also an interesting question about the possibility of aesthetically appreciating damaged environments. How does the morally questionable background of an environment affect its aesthetic value? Can a mine or a quarry, for example, be considered beautiful?

The value of natural environments and green spaces in urban environments on promoting human well-being has also been increasingly recognized. How should these results be taken into account in urban planning? One increasing challenge faced by urban planning is the development of more environmentally sustainable cities. Could aesthetics in some ways aid in achieving this goal?

We invite researchers from different fields of the humanities, including philosophy, and the social and environmental sciences to discuss these questions. People interested in exploring them are asked to send an abstract of about 400 words to iiaa-info@helsinki.fi by the 15th of February 2013. The time allotted to each paper is 40 minutes (30 minutes for presentation and 10 minutes for discussion). 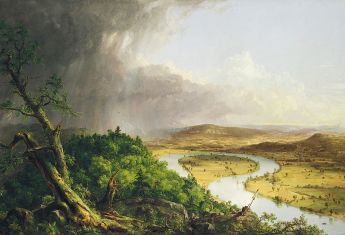 For the second issue of Thinking Nature: A Journal on the Concept of Nature we are seeking papers that address the relation between nature and aesthetics.  Writing on and about nature whether theoretical or not often relies on the aesthetic as a means of highlighting nature’s importance and the importance of ecological politics, activism, and living.  For this issue we are seeking speculative and experimental approaches to the opportunity and problem of aesthetics as it crosses nature, the natural, and ecology.

We are asking for completed manuscripts (in rough draft form or better) of 5,000 – 8,000 words with Chicago style references (footnotes and not endnotes).  We are also interested in art pieces, either single pieces or a small collection, either written, visual, or other.

The deadline for submissions is January 31st, 2012.  Please email submissions to woodardbenjamin@gmail.com  or timothymorton303@gmail.com